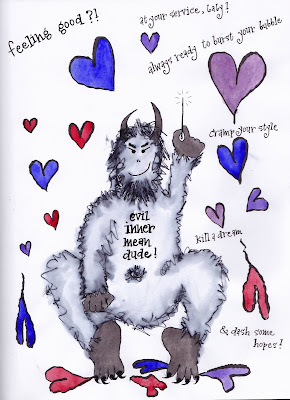 High Art it's not. But it's just not, not all the time. Some comic relieve in challenging times ;) 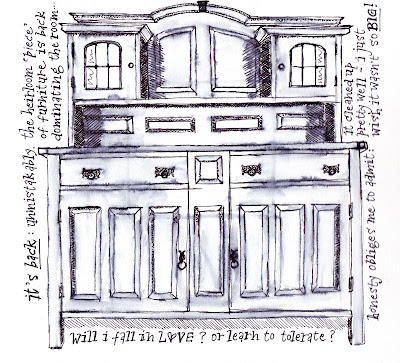 Another sketch for Sketchbook Delight, practising lines and shading. I've got a long way to go on the shading-thing... I just don't see it! I've got a feeling that it's one of those things: once you see it, you pretty much see it. Well, that's what I hope, anyway :)
This is the huge, almost antique dresser Man sort of inherited. As in, someone else in the family inherited it & didn't want it anymore (after having lugged it from South Africa, via England to this here corner), so he scooped ladles of sentiment and second hand-memories all over it, and sort of threatened us into taking it.
It was fine in the old house. It resided in the darkened kitchen and sort of looked good there. If you saw it at all. But in this here house? There are no dark corners! Also, there was no way we could ever manoeuvre it up the stairs in the general direction of the attic. And Man couldn't part with it, because those second-hand memories were also his mother's. And you know what they say about men and their mothers...
But I did put my foot down about the state of the thing. If the only place for it was going to be slap-bang in the middle of the living room of our new and actually colour-schemed home, it was going to be cleaned, stripped and revarnished. Man agreed, and an arm, a leg and a couple of other assorted limbs later, the monstrosity is... uhm... back. And I have to get used to the - sheer hugeness of it, all over again. Also, it sticks out like a sore thumb among our I-need-a-set-of-drawers-oh-let's-go-to-IKEA furniture. Some might say that's a good thing, but I'm not sure.
None of that is of any consequence, though, really. Because It's back, and It's staying. So I'd better do my darndest to grow and love the Thing, dammit! So I drew it and tried. I really did. But I'm not there yet. Not quite...
Posted by Yvonne at 05:40 No comments: 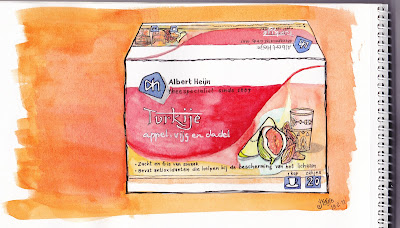 I'm back to more... innocent subject matters :)
Some tea to go with those precariously perched cookies.
I said I wasn't good with shading, right? Turns out, my sense of perspective is seriously challenged, too! So much to learn ;)
Posted by Yvonne at 16:59 No comments:

My Art Journal has been neglected; when it comes to - real, emotional stuff, anyway. I've been focusing on sketching, lately, but to be honest, that's been as much an excuse as it has been fun, and good. I'm still having a tough time sorting through my emotions, and my 'go-to M.O.' is - pushing it all away. So far and so deep that I have no idea what's there and why anymore.

I've (quietly) been reading at Dirty Footprints Studio for a while now. What Connie says about her Art and soul - it's powerful. It inspires me. It makes me want to feel that, too.
When I read about this:

I thought - I wish I could honestly pour some love into my AJ, breathe some life... But that's not what's here, for me, right now. I'm plodding along, muddling through, and that is brave enough.

And then, this happened. 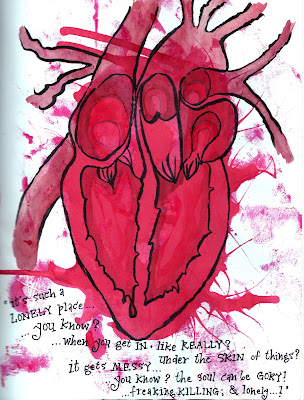 And this is what I found in my morning pages early today:

“It’s crushing that I can’t find much beauty; see much beauty (because I know it’s there!) these days. I’m not in ME. I’m not ‘BEING’, I’m existing. I’m not PROCESSING things. I’m still – pushing everything away. I can’t seem to help myself, because I know it doesn’t work! I’m shovelling snow onto myself to – quieten I suppose – but I end up looking from the margins of ME, wondering why the hell I look & feel like a snowman!

[...But] this heart I drew over copious amounts of smudged & messy vermilion ink is proof that - there is something inside. Something is trying to push through. I feel like I haven’t got a clue left, but then that bloody, messy heart happened! It just happened. And I’m not going to call it ‘breakthrough’ because I don’t know where it came from – but it’s proof that my SOUL is still there, somewhere... whispering stuff I can’t quite hear!
So, bring it ON!”

And I am well aware that this is not exactly 'sharing love', at all. But it's heart, and soul. It's where it starts! Facing fear is where (self-) LOVE starts... & that's why I'm feeling brave enough to share this, anyway. 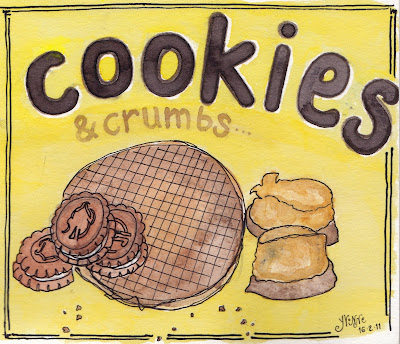 How gorgeous is this?! And it's pretty much at the end of our street! Sketchbook Delight is inspiring me to look around, and to look up, too. I took my camera along on the walk to the grocery store, and there is plenty to see! See, this is why I wanted to come back to old land again. Well, it's one of the reasons. But through the mayhem of the last months, I forgot. And I forgot to really look, too. 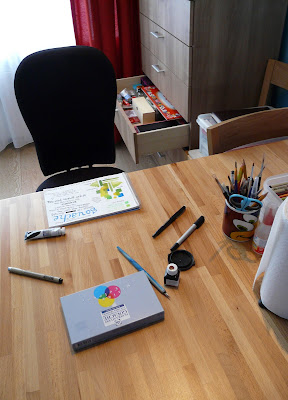 I'm taking Alisa Burke's online sketching class. I love what she does in her own sketchbook, and I'm looking forward to some insight into techniques, especially shading. I'm really bad at shading!
I'm also a little at a loss when it comes to inspiration at the moment. Can't expect fire trucks and the like to drive through this little square every week just to entertain my pens ;)

This first week has been fun. She suggested to make an inventory of supplies, to see what you can do with what you've got. And I've got a lot... It's been sort of liberating to dive right in to play with colours and pen, without having a plan! I never knew you could actually have fun with pens that aren't waterproof!

So I'm looking forward to what's next! It's been really good to fill my 'art time' with a little more than staring at a blank page feeling annoyed, not coming up with something good all on my own... I'm sure my inspiration will resurface (eventually), but there is nothing wrong with learning something in the mean time ;)
Posted by Yvonne at 06:18 2 comments: 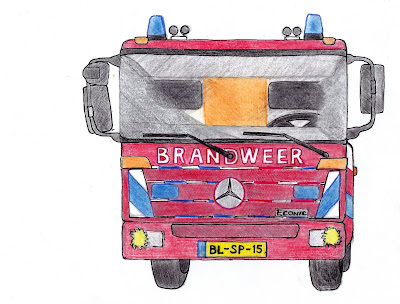 In the stormy winds that raged here the past days, some roofing tore loose off a neighbour's dormer. It was hanging quite precariously, so the fire service was called out.
The truck was parked right in front of our house, and if you know anything about Squirt's LOVE for cars, you can imagine this was Da Bomb ;) He pretty much had his nose stuck to the glass the whole time :)
Posted by Yvonne at 06:06 2 comments:

Inspired by this post on Darrah Parker's blog, I found a quiet, lightfilled moment for a long hard look at myself through my own lens... It's good to do that at times. Document Self. Hard to look at, too. Much harder than looking in the mirror, because it's less fleeting. It makes me feel - vulnerable. 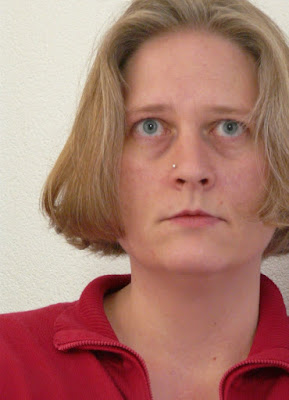 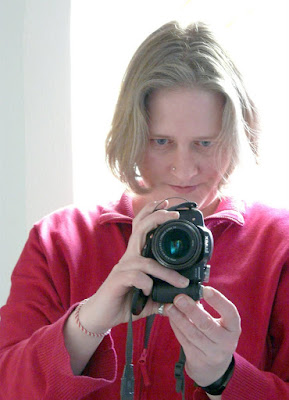 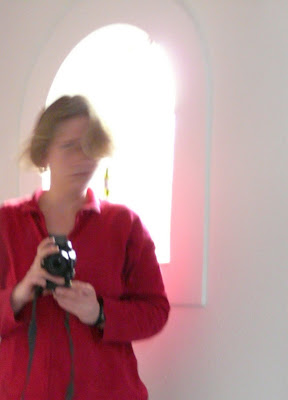 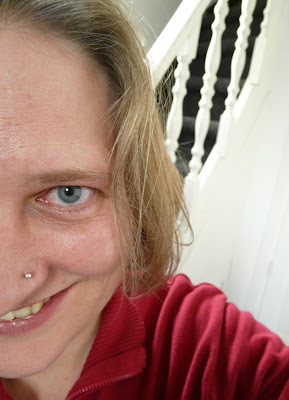 I think it's hard because I'm not used to integrate being me with seeing me. When you look at someone else, you see their features as much as their actions, their words and your own thoughts of them.

I am, to myself, my thoughts, my emotions, my words and my actions. But not - not really - my face. When I look at a picture of myself, I find it almost hard to believe that it's Me. That this is what other people see when they look at me... It makes me feel - out of my depth, even naked, of sorts.
Oh, this is fascinating stuff to ponder! But also, ever so slightly, disconcerting...

Labels: Me (the girl within the Mamma), musings, photography 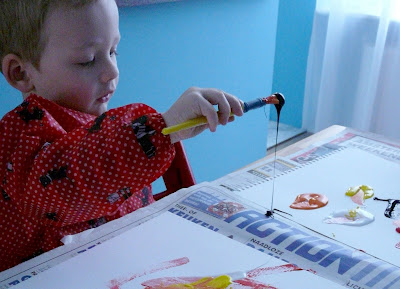 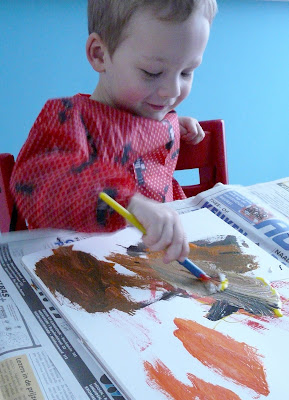 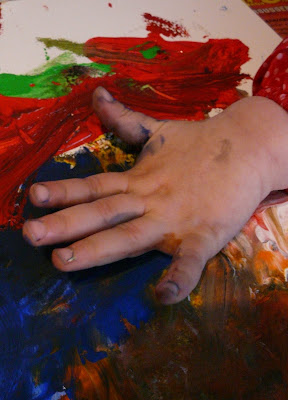 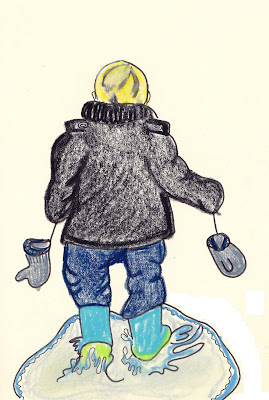 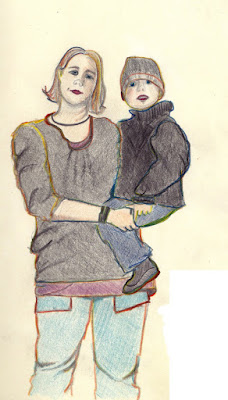 These are some drawings I did last month, for the Sketchbook Challenge. The theme of January was Highly Prized. And while I'm having a hard, hard time getting to my emotions these days, when it comes to Most Loved in my life, Squirt wins, hands down :) Along with the fact that I can actually still carry him... for now...
And of course there is drawing; the creative act itself. Love that. Need more practise, but that's okay. That's why I'm doing these :) Faces... Oww, faces... But the only way to get them right is - practise... (or draw baby boy's butt, of course).
I'm looking forward to finding out about February's theme! And if you've met the challenge, let me know - I'd love to see your work!
Posted by Yvonne at 06:39 No comments:

Yvonne
Woman, warts & all. Mamma! Illustrator, writer. Greying but in denial. Left-handed. Early mornings! Blue & orange! Birkenstocks, but occasionally practising heels! Good intentions, mostly. Flawed delivery, at times. Funny, quick, smart & compassionate on good days. Cynical, morose & behind the wall at least once a month. Exploring the little things; colourful coincidences and still lives, bits of nature and tiny wildlife. No stranger to navel-gazing or thinking too much. I’m slowly getting rid of my yard stick - on the verge of 40, I’m trying ‘more than enough’ on for size. I think, draw and write about what us humans have in common rather than putting a spot light on what separates us. I’m all about honesty & being naked when it comes to growing and stretching. I illustrate vulnerability, being tentative, and light in a dark corner. Life is Potholes, Pancake Days, and finding a smile where you thought there wasn't space for one. That's what I share - that's what it feels like. But you're free to see what you see, of course! 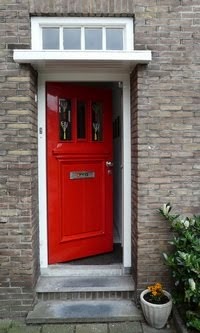 You can find a little portfolio there, as well as links back to this blog and my Etsy shop :)

I have an etsy shop :D

I'd love to know you were here! Follow me, leave a - much appreciated! - comment, or send me an email :)